Shah Deniz gas field is the largest natural gas field in Azerbaijan. It is situated in the South Caspian Sea, off the coast of Azerbaijan, approximately 70 kilometres (43 mi) southeast of Baku, at a depth of 600 metres (2,000 ft). 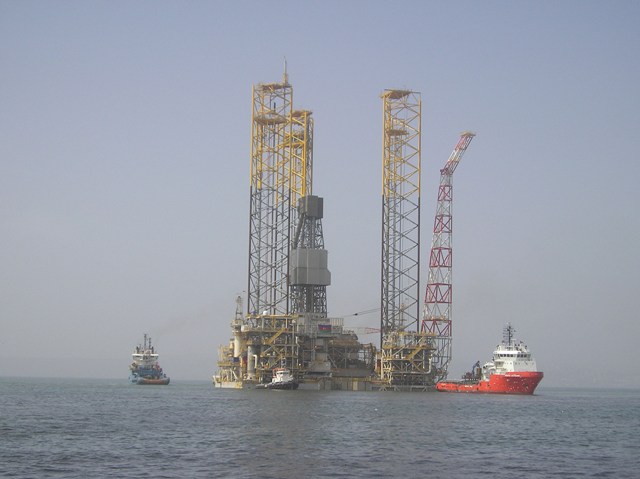 Shah Deniz gas field is the largest natural gas field in Azerbaijan. It is situated in the South Caspian Sea, off the coast of Azerbaijan, approximately 70 kilometres (43 mi) southeast of Baku, at a depth of 600 metres (2,000 ft). The field covers approximately 860 square kilometres (330 sq mi). The Shah Deniz gas and condensate field was discovered in 1999. Stretching out over 140 square kilometres, the reservoir is similar in size and shape to Manhattan Island.
It is considered to be a founding link for Southern Gas Corridor aiming to bring additional and alternative natural gas volumes to EU member countries.
Shareholders
The Shah Deniz field is operated by BP which has a share of 28.8%. Other partners include TPAO (19%), SOCAR (16.7%), Petronas (15.5%), LUKoil (10%) and NIOC (10%).
Eni sold its 5% share to LUKOIL in June 2004. Later divestitures included pre-FID (Final Investment Decision) in December 2013 sales of 10% of the shares by Statoil, to BP and SOCAR who shared them at 3.3% and 6.7% respectively. as well as sale by Total SA in May 2014 its 10% share to Turkish TPAO
In October 2014, Statoil sold its final remaining 15.5% stake in the project to Petronas for a fee of $2.25 billion.
Reserves
The Shah Deniz reserves are estimated at between 1.5 billion barrels (240,000,000 m3) to 3 billion barrels (480,000,000 m3) of oil equivalent from 50 to 100 billion cubic meters of gas. Gas production to date at the end of 2005 was estimated to be approximately 7 billion cubic meters (600 mmcf/day avg). The Shah Deniz field also contains gas condensate in excess of 400 million cubic meters.

Pipeline
The 692 kilometres (430 mi) South Caucasus Pipeline, which began operation at the end of 2006, transports gas from the Shah Deniz field in the Azerbaijan sector of the Caspian Sea to Turkey, through Georgia.

The associated condensate is mixed with the oil from the ACG field and is transported to Turkey through Georgia, along the Baku–Tbilisi–Ceyhan pipeline.

Recent developments
The Shah Deniz scheme started to produce gas at the end of December 2006, three months later than expected, but was forced to close briefly in January 2007. Azerbaijan then announced that the field had resumed output only to admit that it had been forced to shut down for a few weeks due to start up technical issues.The shutdown forced Georgia to buy emergency gas supplies from Russia at a market price. Georgia hoped that production from Shah Deniz will allow the country to decrease its energy — and political — dependence on Russia.

By July 2007, the Shah Deniz gas plant at Sangachal Terminal was fully operational, with all buyers of Shah Deniz taking gas.

The key discussions were concentrated around the selection of a pipeline to deliver the additional gas from the field to the European markets. It took years of negotiations from starting almost dozen of initial pipeline proposals to bring them down to two final competing projects, namely TAP and Nabucco.

This project will include two additional bridge-linked offshore gas platforms, undersea wells and expansion of the gas plant at Sangachal Terminal, at an estimated cost of at least $10 billion.

The overall cost of Phase 2 expansion including upstream and midstream stages (TANAP and TAP pipelines) is estimated to be around $45 billion.